Driving south on U.S. Highway 49, some ten miles south of Wiggins, you come to a small green road sign letting you know you have arrived at McHenry, Mississippi. If you blink, you miss it, but, if you turn right at that sign, a ride into history begins. Driving down North McHenry Avenue, you wonder what might be in this place, but as you bear to the left and round the big corner, you step back some 114 years.

First sighting is “the old store”, actually a relatively new structure used literally as a store, the post office, a filling station, the local library, and storage. But towering above, you see a grand home not unlike those found in New England or in the Mississippi communities known for their history.

In Ohio in 1858, George Austin McHenry was born to descendants of Northern Irish immigrants. He studied Pharmacy at the University of Michigan and then at Tulane University, the later experience exposing him to the opportunities of the virgin pine forests of South Mississippi.  McHenry returned to Michigan where he met Eunice Estella Whitaker (Una), whom he married in Indiana in 1881. Their only child, born in 1891, was Floyd Whitaker, a musician, pharmacist, and an employee of the State Auditor’s office during his lifetime, who also became Chancery Clerk of Stone County, probably much to the elder McHenry’s dismay.

Floyd was my grandfather, a man who died on my Dad’s 15th birthday. My Dad, Gordon Spencer McHenry, was the youngest of Floyd’s six children. His only sister, Dolores McHenry Mauldin, the family historian and the mother to the current owner of the G. A. McHenry House, Hannah Mauldin Cliburn, early instilled in every McHenry grandchild and great-grandchild, the importance to understand our heritage and how that centered, in large part, around this great house and this man, known to his grandchildren as “Ponnie”.

Never one to remain still long, McHenry received his Doctor of Medicine from Louisville Medical College in 1893, following in the footsteps of his father Silas and grandfather Cornelius before him and continuing an interest in medicine that followed him through his grandson Gordon and his youngest great granddaughter Judy McHenry Russell.

In 1889, McHenry migrated to south Mississippi bringing with him fifty-four families from the upper Midwest and establishing what became known locally as the “Michigan Settlement” in what was then northern Harrison County. The settlement stood in the midst of the vast virgin yellow pine forests supporting a lumber boom that caused the area and the small town to prosper. At the height of its prosperity, the town supported a number of plants related to the timber industry and became the social center for the area with a bank, two drugstores, several fraternal lodges, a hotel, a school, saloons and livery stables, and six churches as well as being an important stop on the Gulf and Ship Island Railroad. McHenry practiced medicine there, owned a drug store, co-owned the Majestic Hotel, was a director of the McHenry State Bank and involved in economic development and political activities of the area.

As with many successful businessmen, especially one in those days who, in his own words, “made 24 ocean voyages and once and a half around the world”, a number of his accomplishments can be attributed to his wife. Una oversaw the building and expansion of the house during McHenry’s travels and military career. Initially built as a single story unit in 1895, it was expanded to add the second story and Victorian façade and then improved over time to add an attached kitchen and the important conveniences of indoor plumbing. Una also ran the local newspaper and kept up McHenry’s many obligations as he served honorably in the U.S. Army Volunteer Corps as a surgeon during the Spanish-American War. McHenry was present at the end of the Battle of Santiago on July 3, 1898. Considered an expert on yellow fever, McHenry directed the Yellow Fever Hospital in Santiago, Cuba, as well as serving at other posts in Cuba and Philippines and was honorably discharged at the rank of Captain in 1902. He continued to travel the world into 1903 before returning home to McHenry to settle down with his family.  His zest for travel and adventure continues in his grandchildren, great-grandchildren, and great-great grandchildren to this day.

McHenry’s contacts, including his friendship with fellow surgeon and Medal of Honor recipient General Leonard A. Wood from the Spanish American War and his second cousin Lois Irene Kimsey Marshall, the wife of then Vice President Thomas Riley Marshall, were also important in the establishment of Camp Shelby prior to World War I. Camp Shelby, continues to this day, to serve as an important staging and training area for the U.S. Army in Mississippi.

Upon returning home in 1903, McHenry “practiced in the town I founded”.  Again, in his words, he “followed ordinary country practice all these years.” Even as the lumber boom depleted the forests surrounding McHenry and the Great Depression took hold, certainly not sparing the town he founded, “Doc” as he was called by his patients and neighbors, continued to live there and to promote the importance of the area to the railroad and for the development of other industries. In 1916, the Mississippi Legislature authorized that Stone County be formed, subject to voter approval, a move McHenry vigorously opposed. In May of that year, the voters approved Stone County’s formation and established Wiggins as the County Seat, much to McHenry’s dismay as he had lobbied hard for McHenry to be established as such if a new county was established. Family oral history records he was so angry at the outcome of the election that he tossed the ballot box off the bridge into Red Creek.

McHenry, his wife Una, his son Floyd and daughter-in-law Hazel, two of his grandchildren and their spouses, a great granddaughter and a great-great granddaughter, are buried in the Oaklawn Cemetery in McHenry.

Other than a short period during the Great Depression, since its construction, the G.A. McHenry House has been continually occupied by a member of the family.  Placed on the National Register of Historic Places November 3, 1988, the G. A. McHenry house remains the only Stone County property on the Register and one of the few remaining intact structures of this period in South Mississippi. Though damaged in Hurricane Camille in 1969 and again in Katrina in 2005, the G. A. McHenry House has been completely restored and today still stands tall in the woods of South Mississippi “Doc” loved so much. 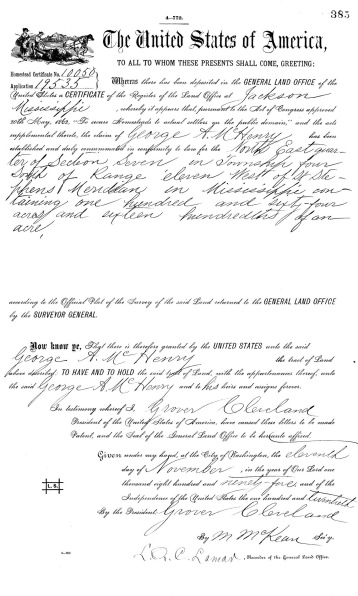 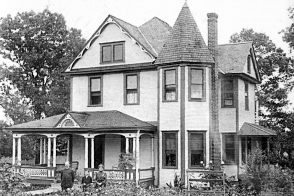 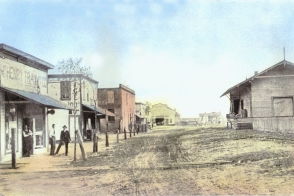 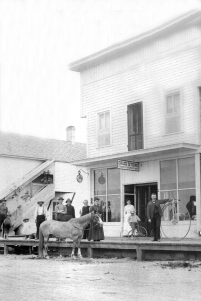 Seal of Town of McHenry

Author: Cille McHenry Litchfield; Article was first published in the Fall 2012 edition of Our South magazine.